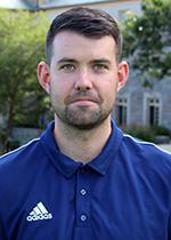 Reuben Burk enters his second year on the sidelines and first as the head coach of the Connecticut College men's soccer program in 2019. He came to the institution after spending one year at Newberry College, two years at the College of the Holy Cross, and two years at Alfred University.

Burk made an immediate impact on the sidelines as the team's top assistant since his arrival on campus. He helped Murphy lead the Camels to a 13-3-2 record overall, including a 7-1-2 mark in conference play, as well as an appearance in the 2018 NCAA Tournament. The most memorable and successful season in school history was highlighted by Burk guiding the program to its first-ever NCAA postseason victory in a 4-0 rout of Thomas College at home on Freeman Field. Furthermore, the Camels produced one United Soccer Coaches All-American, two United Soccer Coaches All-New England Region selections, the NESCAC Player of the Year, and four student-athletes who earned themselves a place on the All-NESCAC First Team this past fall.

At Newberry, Burk was the recruiting coordinator and had the main responsibility of overseeing the recruiting process for all prospective student-athletes, both internationally and domestically. Burk helped establish one of Newberry's most diverse recruiting classes for 2018 by helping get commitments from Brazil, Italy, North Carolina, South Carolina and Maryland. He also coordinated recruiting trips to Iceland, Norway, and Spain.

Burk also served as the assistant coach at Alfred University. The team reached the Empire 8 semifinals in 2014, which marked the program's first conference tournament appearance in nine years. Burk was also part of a group which earned the 2014 Empire 8 Coaching Staff Award.

As a player, Burk was a four-year student-athlete at Hobart College. Under Head Coach Shawn Griffin, in both 2009 and 2011, Hobart finished in the top 25 Division III national rankings and made appearances in the NCAA Division III National Tournament. In 2009, Burk helped Hobart win the Liberty League conference championship.

Burk graduated from Hobart in 2013 with a bachelor's degree in anthropology/sociology and religious studies. He then got his master's in business administration from Alfred University in 2015. Burk holds a USSF C License as well as a NSCAA Advanced National Diploma.