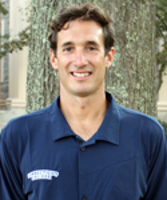 Norm Riker was named the head women's soccer coach at Connecticut College in the Summer of 2011. Riker compiled an impressive 108-51-25 record as the head coach at Wittenberg University,  directing the program to its first four appearances in the NCAA Championship tournament from 2006-2009. Riker says he looks forward to working with Connecticut College student-athletes and competing in the NESCAC.

"The NESCAC is incredibly competitive for women's soccer," Riker said. "With the high level of competition and the caliber of student-athletes attracted to Connecticut College, I'm confident the Camels can become a force in Division III. I am honored and excited to be the next women's soccer coach at Connecticut College. Connecticut College and the region hold life long memories and countless connections to family and friends for us. I look forward to my days of coaching on Tempel Green."

At Wittenberg, Riker directed the program to seven consecutive appearances in the North Coast Athletic Conference (NCAC) playoffs and four consecutive conference crowns. The Tigers climbed to as high as No. 8 in the National Soccer Coaches Association of America (NSCAA) national poll and have been consistently ranked among the top 25 in the nation.

Riker's success on the field can only be rivaled by his team's efforts in the classroom. The Tigers have received seven NSCAA Team Academic Awards under his tutelage and his teams have consistently carried a mean grade point average of 3.0 or higher.

Fran Shields, Connecticut College's Katherine Wenk Christoffers '45 Director of Athletics and chair of physical education, says Riker is a highly respected soccer professional who will bring a fresh perspective to the soccer program.

"We are thrilled to add Norm Riker to our talented coaching staff," Shields said. "Norm rebuilt Wittenberg's program in the very competitive North Coast Athletic Conference (NCAC). We're confident he'll follow the same trajectory with our program within the NESCAC."

Midfielder Jill Cote, a Connecticut College rising senior who was a member of the search committee, anticipates an exciting future for Camel soccer under Riker's leadership.

"Coach Riker's experience, knowledge, and enthusiasm about the game of soccer, set him apart from the other potential candidates," Cote said. "He is eager to take our program to the next level in the NESCAC with his innovative strategies and contagious work ethic. With his direction, he will have an instant impact on our team."

Riker earned a Bachelor of Arts at Springfield College in 1992 and went on to receive a Master of Professional Studies in Education from the State University of New York at New Paltz.

A native of Block Island, R.I., Riker's arrival in New London will be a homecoming of sorts. Riker and his wife Gabrielle N. Antoniadis Riker, Connecticut College Class of 1989, have two daughters, Isabelle and Sofia.